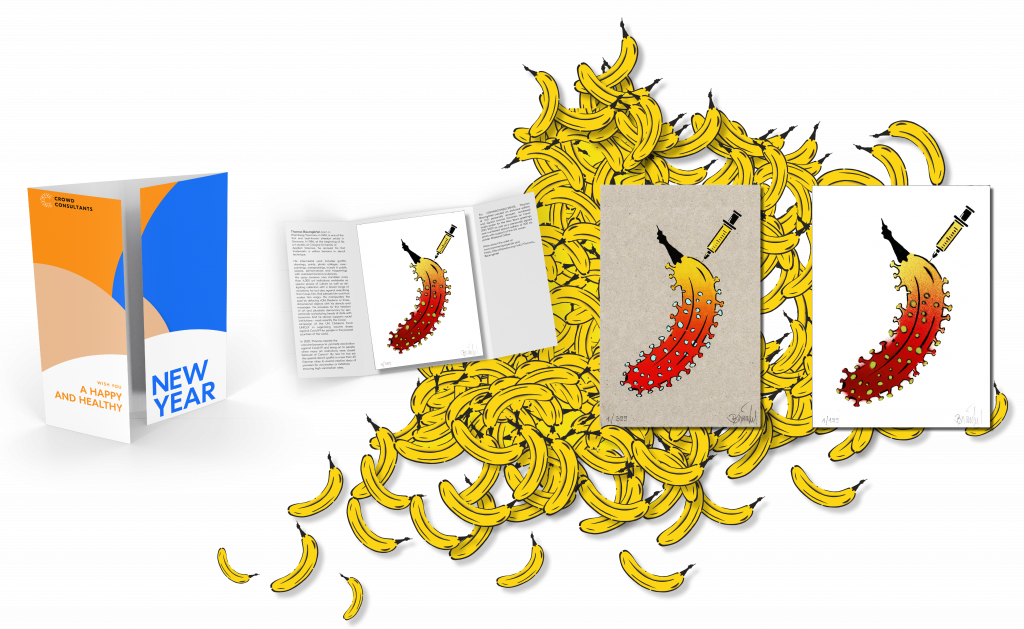 Same procedure as every year: We’d like to thank our clients, team, candidates, and partners for providing us with numerous 5-star-ratings and helping us to again grow by more than 50% over the previous year. For this year’s season’s greetings, we are collaborating with renowned German street artist #ThomasBaumgaertel aka www.bananensprayer.de. For us he applied his stencil »Impfbanane« aka “vaccination banana” in two special editions as graffiti on paper and as silkscreen print on cardboard. To carbon-neutralize the production and shipment of these new year’s greetings CROWDCONSULTANTS will plant trees for www.waldfuermorgen.de initiated by artist Andreas Greiner.

“For CROWDCONSULTANTS the »Impfbanane« is a symbol for the trust in mankind’s overall intelligence and power to adopt”, said Managing Director Peter Bachsleitner, “but it is not the one-of-a-kind solution. We still need to accelerate digitization and new work, where CROWDCONSULTANTS has been a pioneer since its foundation in 2016”.
The company will also auction some of its »Impfbanane«-edition to support of the Covax campaign of the UN Children‘s Fund UNICEF, which is helping to organize vaccine doses against Covid-19 for people in the poorest countries of the world. In December 2021 one of Thomas’ »Impfbanane«, originally tagged on a mobile wall of a vaccination center in Cologne, Germany, already raised 13,200 euros for the Covax-campaign.

CROWDCONSULTANTS is a leading provider of high-end staffing solutions and pioneer in Consulting 4.0, focused on leveraging consistent digitalization, sharing economy principles and crowdsourcing of intergenerational teams. The company has received multiple awards for trailblazing New Work principles and demonstrating the advantages of self-determined remote working. This guarantees a high level of professionalism, efficiency and sustainability as well as regular 5-star ratings by enthusiastic employees and satisfied customers such as ALDI, DKMS, European Space Agency, EUMETSAT, Ionity, Knauf, STADA, Wittur and numerous start-ups.
More about the company at www.crowdconsultants.com

Thomas Baumgärtel is a German street art pioneer 1960 born in Rheinberg/Germany. In 1986, at the beginning of his art studies at Cologne University of Applied Sciences, he sprayed his first trademark: a yellow banana using stencil technique. This iconic spray banana now ennobles more than 4,000 art institutions worldwide as special places of culture as well as delighting collectors with a broad range of variations: for but also against anything that moves him, that pleases him and that makes him angry. In 2020, he created the »Impfbanane« to „promote vaccination against Covid-19 and bring art to people when many art institutions were closed“. More about the artist at www.bananensprayer.de 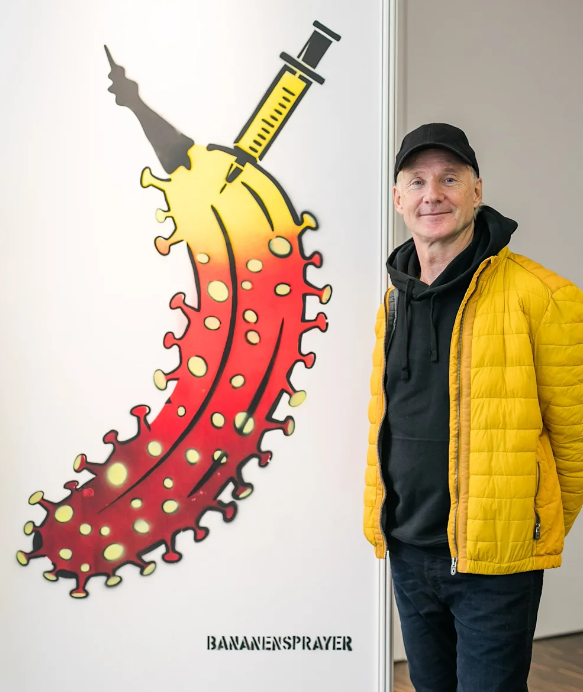