Press Release: CROWDCONSULTANTS awarded as Company of the Year at International Business Awards 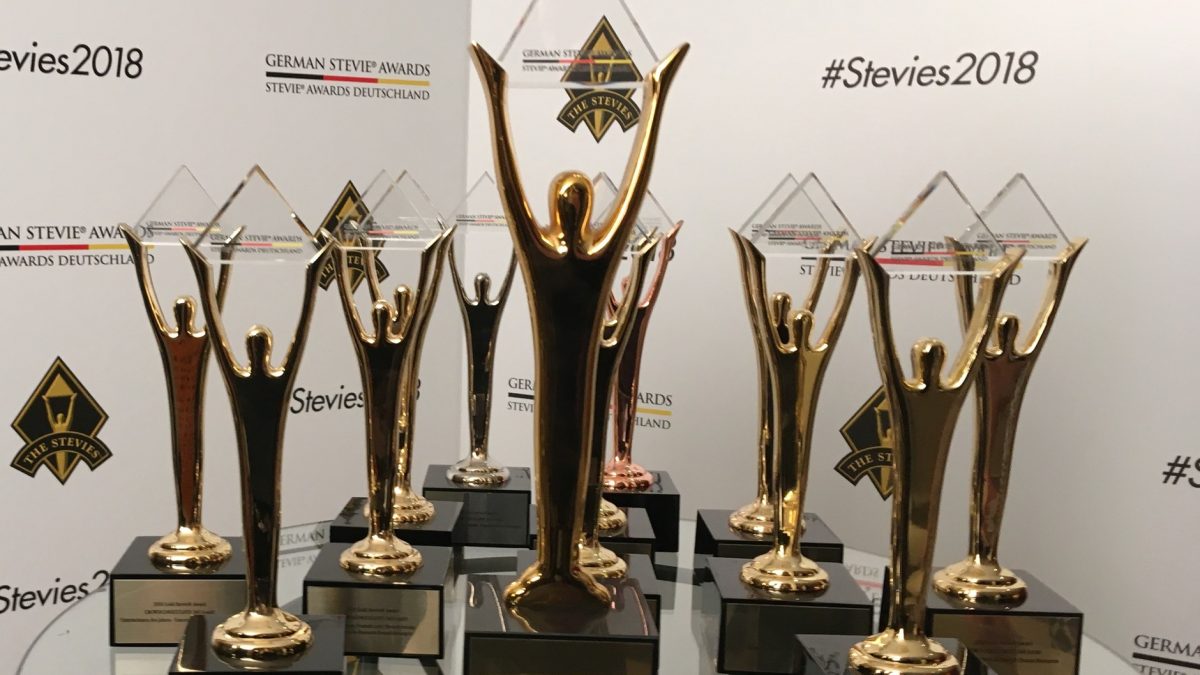 Consultancy 4.0 awarded as Company and Start-up of the Year at the International Business Awards

Berlin, 20 August 2018 – A jury of worldwide experts assessed 3,900 nominations from 74 countries and selected Berlin-based CROWDCCONSULTANTS 360 GmbH as the ‘Company and Tech Start-up of the Year’ in the Services area. With a total of 10 trophies, twice gold, twice silver and six times bronze, the virtual consulting network is one of the most successful companies of the 2018 (15th Annual) International Business Awards®. The world’s premier business awards will be presented on 20 October 2018 in London.

At the German Stevie Awards® in spring 2018, CROWDCONSULTANTS had already set a new record: 13 trophies including ten gold and the coveted Grand Stevie for the company of the year across all categories. „Gaining now also recognition in international competition shows that we are on the absolutely right track with our pioneering work of Consulting 4.0“, says Damiano Albrecht, Managing Director of CROWDCONSULTANTS.

At the International Business Awards® CROWDCONSULTANTS has now been top-ranked as „Tech Start-up of the Year“ in the „Services“ category and as „Company of the Year“ for „Business & Professional Services“. The jury was impressed and commented: ”This nomination is truly amazing and inspiring”, “a strong and inspirational business model for today’s fast changing environment” and “this could easily be the future of consulting”.

The judges highlighted on the innovative business model: Firstly, the project-specific recruitment via crowdsourcing in social media and the company’s own network of experts. Secondly, the intentionally cross-generational project teams of young digital experts and former top managers. Thirdly, the consistent digitization and virtual infrastructure according to the principles of the sharing economy.  In this way, customers can be supported in recruiting, consulting and implementation much more agile, sustainable and with more attractive conditions than by traditional consulting firms.

Founding team with awards as Executive and Chairman of the Year

CROWDCONSULTANTS is developing rapidly. As the virtual network is consistently expanding to include former top managers, the consulting portfolio grows with them. „Our flexibility and our areas of application are constantly increasing with the diversity and many years of experience of our executives. More and more former business leaders are joining our network,“ says Damiano Albrecht. „They enjoy coaching young talents after a successful career and making their knowledge available in the context of transformation programmes for larger companies or supporting the development of start-ups”.

CROWDCONSULTANTS 360 GmbH was founded in summer 2016 in Berlin by Digital Natives Damiano Albrecht and Stefan Heidloff together with former top executives Torsten Ecke and Peter Bachsleitner.  They see themselves as a cross-generational, cross-industry and cross-functional management and personnel consultancy that consistently focuses on digitization, crowdsourcing and the principles of the sharing economy. This has already convinced several start-ups and well-known companies such as Audi, ING Bank, Knauf and the European Space Agency.

The International Business Awards („Stevie Awards“ – named after the trophy) takes place annually. They are among the world’s most important business awards and were launched in 2002 to recognize and recognize the achievements and positive contributions of organizations and professionals worldwide. In a short time, the award has developed into one of the most coveted prizes in the world.